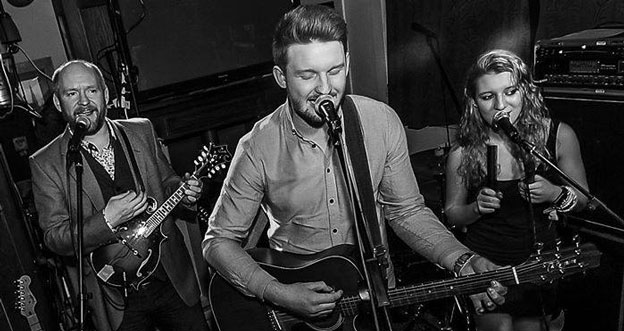 Party Bands
BIO
3 voices and 18 strings; Waiting for Susan (Chris, Rach and Ian) are a unique, refreshing three-piece folk-pop group featuring guitar, violin and mandolin beautifully interwoven with three part harmonies throughout. As well as singing the beguiling, story-telling tracks they write themselves, Waiting for Susan take songs that everyone knows and loves – the latest, biggest tunes as well as much loved modern classics – and add a twist or two of their own creating a singular sound that leaves a lasting impression.
Hailing from Staffordshire, they are a family band (Ian is Chris and Rach's step-father) who simply love to play music. After deciding to see what the public thought of the music they'd been playing at home, Waiting for Susan began touring locally. They were delighted by the reception that they received, and more gigs quickly followed.
In May 2012 after being invited to watch a friend's band play in a ‘Battle of the Bands’ contest Chris decided he’d rather join in and entered Waiting for Susan (who at the time were using the name Band Camp). Much to their surprise they won their heat, and much to their amazement two days later they won the final, becoming champions of Battle of the Bands 2012. Less than a year after playing their first open-mic night the band successfully auditioned for the renowned Glastonbudget music festival, where they appeared in 2013 and 2014 and will return in 2015. Many other festivals followed that year, and continue to do so!
Waiting for Susan perform their own gigs, weddings, parties, public and private events, fashion shows, pubs, clubs and festivals. The added bonus is that Waiting for Susan are also able to perform completely ‘unplugged’ should the occasion require it.
And who is Susan? She’s Chris and Rach’s little sister; Ian’s daughter. The band are waiting for her to be old enough to join them...
SET LIST
Mr Brightside - The Killers
Get Lucky - Daft Punk
Billie Jean - Michael Jackson
Somebody That I Used To Know - Gotye
Uptown Funk Mark Ronson / Bruno Mars
One Day Like This - Elbow
Mr Blue Sky - ELO
Little Lion Man - Mumford and Sons
Ho Hey - The Lumineers
I Will Wait - Mumford and Sons
Dakota - Stereophonics
Viva La Vida - Coldplay
Galway Girl - Steve Earle
Happy - Pharrell Williams
Don't Stop Believing - Journey
The A Team - Ed Sheeran
Sing - Ed Sheeran
Wake Me Up - Avicii
Rather Be - Clean Bandit
Fill My Little World - The Feeling
A Little Respect - Erasure
Valerie - The Zutons
Budapest - George Ezra
Dancing In The Moonlight - Toploader
Come On Eileen - Dexy's Midnight Runners
I'm A Believer - The Monkees
Superstition - Stevie Wonder
It Must Be Love - Madness
Come Together - The Beatles
And many more...

Enquire about booking Waiting For Susan